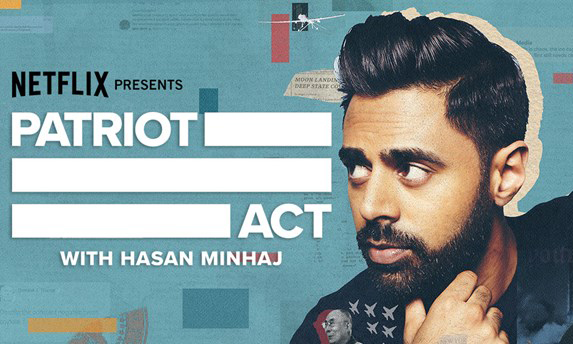 Hasan Minhaj should be the new comedian on your radar. Known for his Netflix special Homecoming King which so eloquently relates the immigrant story in a humorous light, Hasan has embraced his role as representative to the POCs who are ready to be heard. Hasan began his journey as a correspondent for the Daily Show under Jon Stewart, a coveted position that has been held by many comedic greats, some of which you might know (Steve Carell, Ed Helms, John Oliver, Samantha Bee, Stephen Colbert, Josh Gad). He really blew up about two years ago when he took the job no other comedian in the biz wanted: giving the White House Correspondent’s Dinner Speech. It was the first under Trump’s regime, and even though Trump wasn’t present, Hasan packed some punches. In fact, he rebelled in just the right way, leaving no political “side” unscathed, which then allowed him to end with an objectively insightful, hopeful tone that I find is central to all of his projects. Hasan makes you laugh but more importantly he makes you feel and think at a deeper level, which is why you should now watch Patriot Act.

Patriot Act is a comedic and political show on Netflix and for now, Youtube, that covers topics ranging from affirmative action to Saudi Arabia (which if you haven’t heard, banned an episode of his show just a few weeks ago), oil to Supreme, and from Amazon to drug pricing. He stirs the pot (see aforementioned ban) in a rational, educational way. Remember AP Gov? Well, he’ll definitely revisit things like the Sherman Antitrust Act. Didn’t like the class? Don’t worry, he’ll sprinkle in tidbits about the immigrant life, material only sneakerheads will understand (it goes right over my head), and NBA jokes for those of you into sports, which ultimately makes it feel less like you’re learning and more like you’re in a conversation.

In fact, what really propels the relaxed feel of the show is the way it’s set up. Sure, Hasan is talking at you pretty much the entire time but he’s also standing in casual (but very stylish, if I do say so myself) clothes. This is starkly different from his contemporaries who are in the same political comedy realm (think John Oliver, Stephen Colbert although he does stand during monologues as well, and Trevor Noah) who wear suits, are often restricted by a desk, and limited by what they can say on air (and by that I’m refering to swearing and non-swearing censorship). Minhaj’s show feels more real because he walks around, uses his hands (a lot which has actually become a running joke, see video below), and does his entire routine in front of a bunch of screens with beautiful graphics. He’s also a lot younger than his comedic contemporaries -Trevor Noah is probably the only other main figure who comes close- which means that his comedy does work better for millenials and younger. I also find his booming, trap, siren-filled theme refreshing and memorable and he’s even added lyrics in an off-key rendition he performed for a digital exclusive. Ah, and now we have come to the digital exclusive. Minhaj differentiates himself once again with these special clips that take stripped down to a whole new level. These are clearly for a BTS window in which we, the audience, get a glimpse into the inside jokes that take place at the office. Yeah, there’s a running joke about his terrible SAT score, and there’s one about him reading all the comments. What better way to connect with your audience than by reading their comments? He also interacts with the live audience that comes to the tapings in a Q & A style conversation and these are hilarious. It’s where you can truly appreciate his comedic chops because he’s able to generate on-the-spot witty banter that shows you he can truly pull of anything.

Hasan is like a cool dad (actually, he is a cool dad to a two year old baby) who has insane energy (though his eyes get a little too bug-eyed sometimes) and concern about the world. In fact, the origin of this show really comes down to him wanting to share a perspective no one else (specifically, Bill Clinton) was going to get. The entire essence of his show is talking about things that should matter but don’t because we tend to skim over them on the rare occasion they pop up on our radar through the media. There are wars and humanitarian crises in foreign nations that we don’t know enough about. There are monopolies and drug issues at home we don’t focus enough on. Patriot Act tries to change that landscape. Even the name, inspired by a real congressional act passed post-9/11 that was notorious for the way it justified increased surveillance of the American public, and specifically Muslims in America, is meant to invoke a feeling of fighting the status quo that has hurt millions but goes rather unnoticed.

Minhaj ripoff of John Oliver. But even though he jokes that he’s “the brown one” which is why you should watch his show out of the surplus of similar shows in this arena, it is sort of the truth. Minhaj brings a different perspective worth listening to. Now that may be biased coming from a brown person like me, but I find that his story resonates with anyone who gives him a shot, and that too for different reasons. Hasan does smart satirical humor, silly humor, slapstick-ish, and more which makes him a complete package. He thoroughly covers topics for twenty whole minutes, in well-researched, engaging (imagine trying to make twenty minutes of an educational topic fun to the masses) episodes that explain a topic from bottom up. You may be completely unaware about something but by the end, he will have covered it so thoroughly, in a way that keeps it relevant months later, that you can’t help but learn. And if that is unappealing to you, I’d still say give it a shot because it truly feels like a new genre. Next time you’re in the mood for something different, check him out. His shows come out every Sunday and he posts on Youtube too so it’s pretty much accessible to anyone and everyone for a really great binge.

The running joke about his arms:

Minhaj’s reason for starting Patriot Act, it starts about half-way:

The episode about Supreme because I’m hoping that it’ll get you hooked: