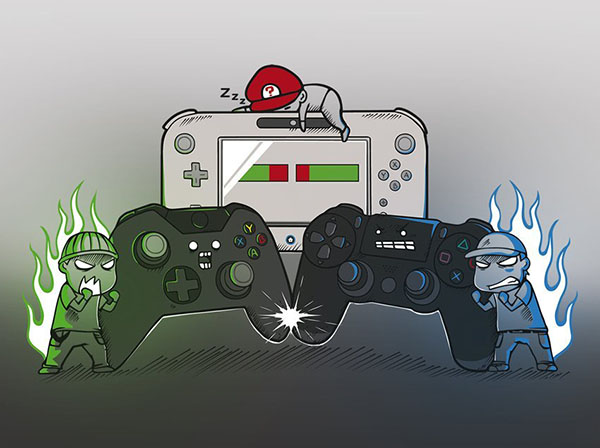 Battle of the Consoles

Okay everyone, buckle up because we’re going into the videogame world. We’re not just talking
about videogames ladies and gentlemen,we’re diving into what I believe is the most toxic part of
gaming. The Console Wars. For the record I am not in favor of the war and believe it is childish
and overrated.

For those who don’t know, The console wars is represented as a vicious cycle. New consoles
come out, people argue over which is better and cite various statistics most of the time graphics,
lather, rinse,and start the cycle over again.console wars are nothing but a Scheme for gaming
companies to make money. It’s a subject that should not have ever been taken to this extreme,
but unfortunately it has been. No one should ever let these immature banters influence their
decision on what console they want to game on, because your choice matters, not anyone else.

When growing up I have had a Nintendo, Microsoft and a Sony system. At recess everyone
would argue about which game was better on that platform. Even with all 3 systems I myself
participated in the banter because that’s what kids would do. Because it was childish. In the end
though it would always resolve in a friendly fashion. Nowadays you have people saying vulgar
things on the internet just to hear that there system is better. My advice to you, If you ever come
across these types of people on any social media site, the best way to deal with them is to
ignore them and go about your business. Do not feed their ego.

In 2013 Nintendo finally retook the industry’s throne with the Wii selling over 101 million units.
Xbox 360 made a huge improvement over its predecessor by selling 84 million units, while the
PlayStation 3 sold about 80 million as of Nov. 2013 making improvements to its model as well.
These statistics are things that fuel the console wars. These are just numbers that shouldn’t
mean anything to you, but mean a lot to the businesses making money. Just because the Wii
outsold PlayStation and Xbox does that mean you have to buy one?

The gaming industry has advanced in leaps and bounds in technology and entertainment,
setting new bars every year in graphical ingenuity and game play experiences. Be thankful that
we have this type of technology for gaming in the first place, brand competition between
companies inspire them to improve gaming. Competition between the fans though, when taken
to extreme levels only breeds this type of childish behavior.