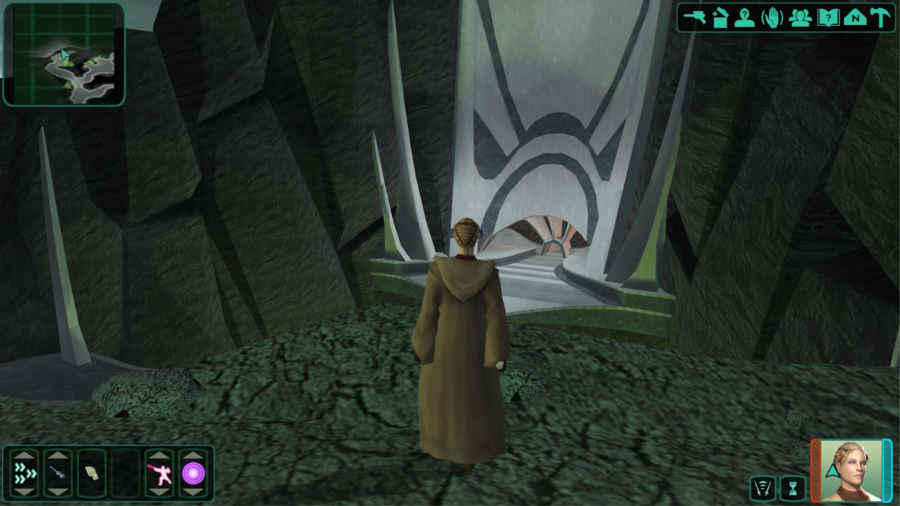 It’s 2020, and Star Wars is as bustling of a franchise as it always has been. While The Rise of Skywalker and the sequel era as a whole has been disappointing, save for Rogue One, there’s one game from the ill-considered prequel era of Star Wars that’s been gaining a lot of love lately. It’s the Knights of the Old Republic titles. Released in 2003 and 4 by Bioware and Obsidian Entertainment respectively, I’ll be taking a look at the sequel, and tell you why you should play this excellent game. Firstly, however, I need to give one word of advice: play this with the restored content and widescreen mods. Also play the first if you want to fully understand the story, even if the story there is just the occasional Star Wars romp.

This sequel initially shipped with less content than its predecessor, in part of LucasArts rushing the game’s release for Christmas, causing many great things to be removed. The Restored Content mod also patches up additional bugs that were leftover from the original game, so it makes the restored content mod mandatory if you want to save yourself from pulling your hair out. The widescreen mod is also mandatory, as it fixes the User Interface, preventing it from being squished and your cursor from being majorly cramped and clicking outside of the game.

When you start the game, you’re immediately filled with trepidation. After pulling the Ebon Hawk into a mining station for repairs, your character awakens and breaks out of a bacta tank. Desperate to find someone living in this seemingly abandoned station, you will eventually find an old woman lying on a bed that awakens. Her name is Kreia, and she’s a really interesting character. Her character is one of the most divisive aspects of the game. However, her role in the influence system seems to make you embrace the dark side. That’s nice if you want to be evil, but is quite annoying if you wanted to go light-sided on your first playthrough. Continuing onward, you meet Atton Rand, and the three of you team up to get your ship and get out of there, though not without meeting one of the first Sith lords as a mysterious abandoned ship pulls in. Another part of the plot unfolds as you feel Kreia’s pain after she takes a mortal wound from the Sith lord, indicating you have a force bond with her.

Along the way, you’ll meet your other companions. Some are dependent on your gender, others dependent on alignment, and one has to be rebuilt with easy-to-find droid parts. The main premise of the story is to find the Jedi Masters who exiled you in the first place, but it’s not without a proper order. Nar Shaddaa is the best place to start as it gives you the main exposition of the story, with Bounty Hunters coming after you from every angle, and even you making possible companions with one of them, depending on your aforementioned alignment. Afterwards, go to Dxun/Onderon, then to Dantooine, then back to Dxun/Onderon, then to Korriban. As hectic as it sounds, it’s the best order given the difficulty of each planet. Korriban especially can be a frustrating planet to go through if you don’t have the proper Jedi build.

Gameplay wise, it’s sort of different compared to the first. The major difference is that you aren’t waiting 10+ hours into the story to get Jedi powers like you were last time. Instead, you get them on the first level up. Knights of the Old Republic II is also more of a philosophical game than the first. Whereas dialogue is cheesy, almost at a prequel level, in this game most characters make you think. Whether they be Kreia or the blind Sith you befriend early on, the game’s characters and story really turn the gears in your brain.

The game also adds a crafting system to the mix. Compared to the last game’s upgrade system, the crafting system comes in two variants. Creating items (medkits, armor upgrades, weapon upgrades, mines, etc.) is the primary use for workbenches and lab stations, whereas breaking down items allows you to gain materials for both of these stations. Getting to craft medkits/repair kits is rather satisfying, as it beats buying them from a vendor, like you had to do in the last game. Resources aren’t that scarce, either, as you can break down anything. In conclusion, you may be wondering where you can get your hands on the game.

Knights of the Old Republic II is available for only $10 on steam, but $3.49 on sale, and the same price on GOG. The steam version with the Restored Content mod is the easiest way to go, as it has the Steam Workshop, allowing you to get more mods to your heart’s content. The game isn’t hard to run on modern computers, either. The only tweaking required is to tweak an ini file and space out “DisableVertexBufferObjects”, adding a 1 to the end of the equal. Also right clicking on the executable and adding scaling dependent on the application fixes the major issue of the game clicking outside of its window.